I love a good upside-down cake. It’s easy to make, and I especially appreciate that, when time is at a premium, this type of cake is already dressed up and ready for company as soon as it pops out of the pan. 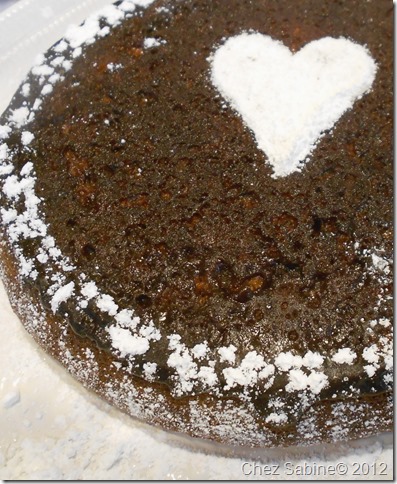 Since I like to come up with my own recipes when I can, I’ve been tinkering with the idea of an upside-down cake that uses the hot buttered rum mix I posted last week. And, so, this weekend, with a house full of company, and not a lot of time, I ended up with a recipe that I think works perfectly. It’s a simple combination that lives up to its namesake cocktail. HBR batter mix with some extra butter as the topping, a demure yellow cake perfumed with a little vanilla, and a thorough soaking from a lightly sweetened rum syrup flavored with a dab of additional vanilla. Really, it’s a slice of hot buttered rum. 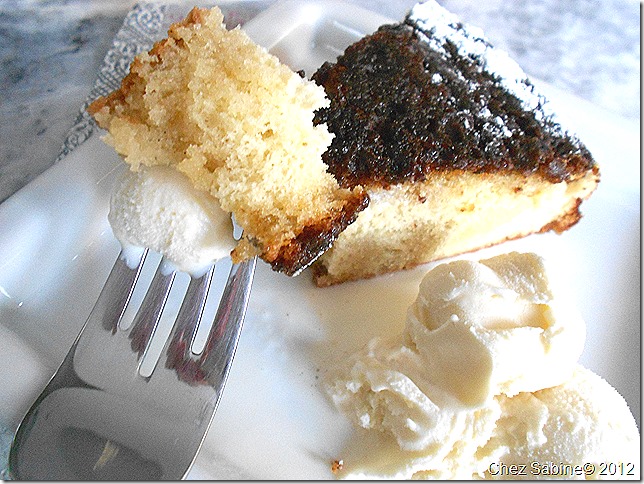 For toppings, traditional upside-down cakes use fruit, which, when mixed with the sugar and butter, form a soft, moist caramel topping. For my version I, obviously, didn’t use fruit, so the topping comes out more as a crunchy, buttery crust. The rum comes into the picture in the form of a potent syrup that you pour on the cake just before you invert it onto a plate. And because there’s no pretty fruit pattern on the cake, Hot Buttered Rum Upside-Down Cake is the perfect candidate for a nice shower of powdered sugar, or you can take it up a notch with some pretty piped whipped cream rosettes. It’s also not too shabby with a small scoop of ice cream.

There are three components to this cake. But each of them is easy, and you can make it from start to finish in about 1 hour. I’m assuming, of course, that you already made the Hot Buttered Rum batter last week and it’s stashed in your fridge. 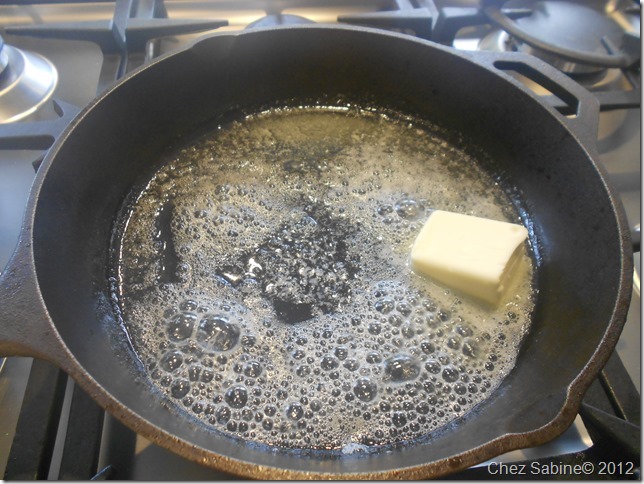 Melt your butter and let it brown a bit.

Add the HBR mixture and let it melt and come to a boil. Then remove it from the heat.

To make the cake batter, start by beating the yolks with sugar to form a pale yellow, creamy mixture. 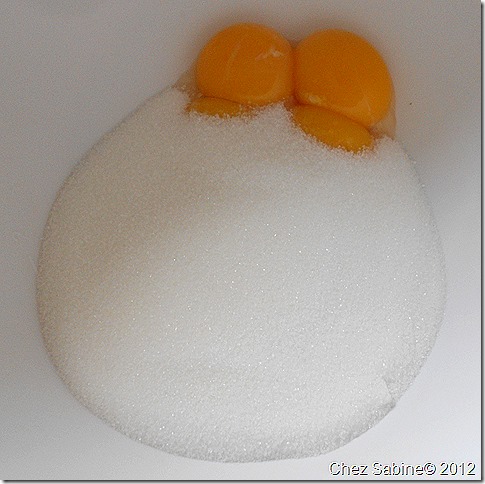 After whipping the egg whites to stiff peaks, add 1/2 of them to half of the dry mixture in the beaten yolk/sugar combination.

Yes, the egg whites are certainly perky, and at the correct stiff peak stage.

Pour the batter over the cooled butter and melted HBR mixture. 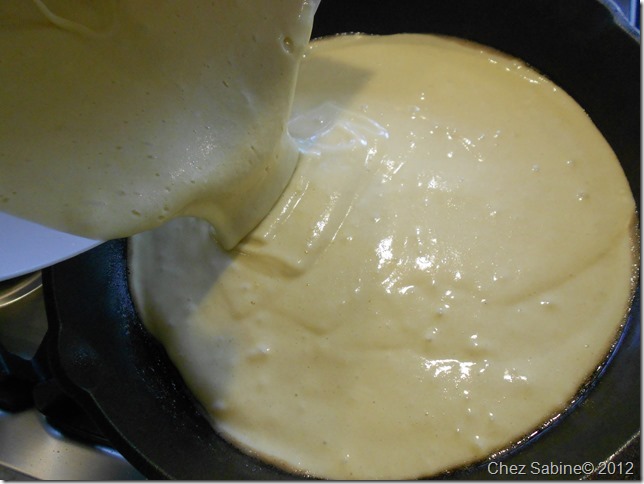 After 30 minutes, your cake should be perfectly baked.

I use a fork to poke a ton of holes over the whole cake while it’s still hot.

And, now, I pour the potent rum syrup over the cake, and it gets soaked up like a sponge. You’ll be amazed how thirsty this cake can get. 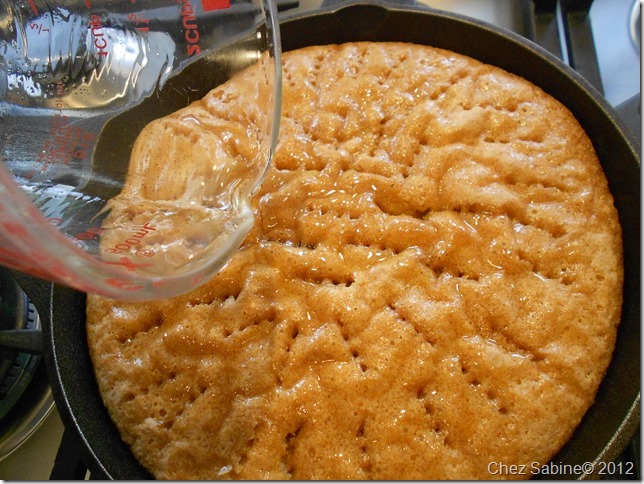 Now, while it’s still hot, carefully flip it over onto a large plate or serving platter. 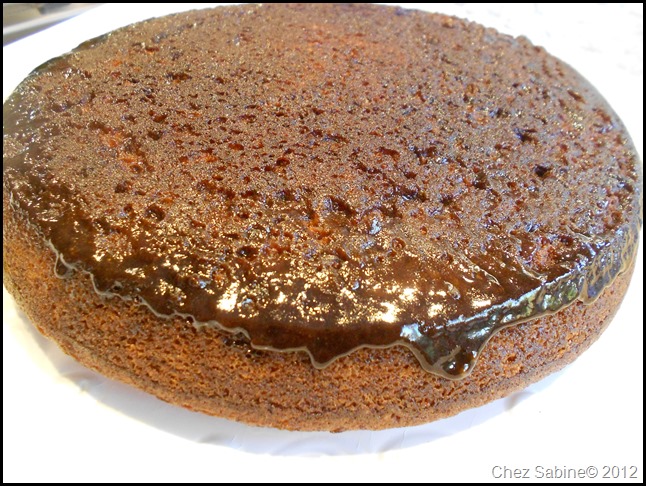 The rum syrup is just about the easiest part of this cake to make.

Bring the water and sugar to a rolling boil until the mixture has thickened just slightly, then remove it from the heat.

Once it’s off the heat and cooled for a few minutes, stir in the vanilla and the rum. That’s all there is to this fragrant, slightly sweet soak.

An ideal travel companion, this cake isn’t fussy, but it is loaded with rum, so you might want to keep it away from the kids, and not smoke while indulging. Give it a try and let me know what you think.

In a 10-inch cast iron skillet, melt butter until it’s slightly browned. Add the HBR batter and stir until sugar is melted and mixture is bubbly. Remove from heat.

Sift flour, baking powder and salt in a small bowl and set aside.

In a large bowl, beat egg yolks and sugar until pale yellow and creamy. Beat in vanilla.

Clean and dry your beaters well. In a separate bowl, beat the egg whites until they form stiff peaks.

Add 1/2 of the dry mixture and 1/2 of the beaten egg whites to the egg yolk/sugar mixture, mix on low until smooth. About 30 seconds or so. Don’t over beat. Add the rest of the dry mixture and beat on low until smooth. Then add the rest of the beaten egg whites and fold them in with a spatula or wooden spoon until you no longer can see the egg whites. You don’t want to beat it at this point, or you’ll deflate the batter.

Pour the batter over the cooled topping and bake for 30 minutes or until a knife comes out clean.

Remove the cake from the oven, run a knife around the edges, then with a fork, poke holes all over the top. While the cake is still hot, pour the warm rum syrup carefully over the whole cake. You might see it bubble around the edges. As soon as you’ve poured the syrup, carefully invert the cake onto a platter. Decorate with powdered sugar when cool, if you wish.

Combine sugar and water in a small sauce pan and let boil for about three minutes. It’s still very liquid but you should notice that it’s slightly thicker than just water. Remove from heat and set aside. When it’s slightly cooled, stir in the vanilla and the rum.